Apple Vs Android – Waste of Time or Pure Genius?

Home > Editorials > Apple Vs Android – Waste of Time or Pure Genius?
Looking for Tips and Tricks? They're here!
Posted by Bryan on 13th March 2012

Not since Wile E. Coyote and the Roadrunner have we marvelled at such heroic efforts to better a nemesis. The war between Apple and Android has been raging for some time now, but the question seems to be turning into not ‘Who is the best?’, but rather ‘Who is the most ridiculous?’ 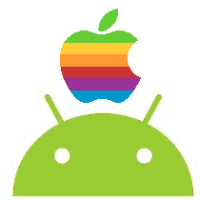 Depending on which way you look at it, Apple’s introduction of Siri to the iPhone 4S could be seen as revolutionary or just downright terrifying. The official tagline on the Apple website is simply ‘Your wish is its command’. Now, if you ask me, that’s just rather unsettling.

The purpose of Siri is to make your phone easier to use – because a full touch screen and no hindrance of buttons is just too darn complicated and time-consuming these days. With Siri we can just talk to our phone, because walking down the street conducting a conversation with your mobile device is completely normal and no one would ever look at you like you’re in any way deranged. Not only does Siri listen to what you have to say, it can interpret your meaning.

So when you say ‘I feel like heading to a strip club’, your iPhone 4S will be able to tell you all about the strip clubs in the vicinity. But shouldn’t some things be kept between you, a touchscreen and a Google search? Siri is also able to schedule meeting and dates, place phone calls and send text messages for you. The possibilities are endless.

There’s something about a computer having that much control over your life, however, that just seems… frightening. I’m suddenly reminded of the Red Queen in Resident Evil who had control over an entire corporation and killed all of its employees for no discernible reason. Not a good sign, Apple.

As for Android, it has developed face recognition software to render passwords useless and unnecessary. Giving it the snappy title of Face Unlock, Android now gives its mobile users the possibility to do away with passwords and simply use their face to unlock their phones. Fair enough. We all, undoubtedly, have a face. And it’s not like we would ever be likely to forget that face.

But the internet is currently erupting with stories about people hacking in to this high-tech Face Unlock device by simply holding up a photograph of the phone’s owner. So now, thanks to Android, all pick-pockets need is your wallet and your phone and hey presto, instant access to everything!

All these ingenious new developments make me think: do we rely too much on technology, or is it just simply evolution? Time will tell. For now, Apple and Android look set to continue their relentless battle for tech supremacy.